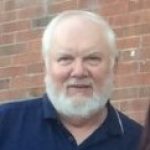 Born in the Hudson Section of Plains, he was the son of the late Stephen and Violet (Suchoski) Rogaski.

Bill was a graduate of Plains Memorial High School, Class of 1964, and was an Army Veteran serving with the Pennsylvania Army National Guard, 109th Field Artillery Battalion. He was employed as a heavy equipment operator for International Union of Operating Engineers, Local 542, Plains.

Bill was an avid New York Yankee, Chicago Bears, and Dale Earnhardt, Sr. fan. Known as
“Pop Pop” by his grandchildren, he never missed a function or game they were involved in. He was so proud of each and every one of them, and they were his life along with his wife and children. Bill was “Mr. Fix-It” and would offer a helping hand in anything that needed to be fixed or repaired.

In addition to his parents, he was preceded in death by his brother Thomas Rogaski.

Funeral services will be private and held at the convenience of the family from the Corcoran Funeral Home, Inc., 20 South Main Street, Plains, PA 18705. There will be no calling hours.

Memorial donations may be made to the charity of one’s choice in Bill’s memory.