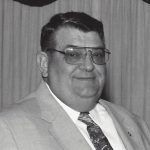 William J. Kozerski, 83 of the Hilldale section of Plains Township, passed away Sunday evening, March 18, 2018 at the Wilkes-Barre General Hospital, with his family by his side.

Born in Hilldale, he was the son of the late John W. and Mary F. (Volingavage) Kozerski, Sr.

Bill was a graduate of Plains Memorial High School, Class of 1952, and served in the United States Naval Reserve for 8 years, attaining the rank of Radioman First Class, Petty Officer.  In 1976, Bill earned his Associate Degree in Business Administration – Real Estate at King’s College.

He was employed at the Wilkes-Barre Sunday Independent for 43 years, from September of 1950 until its closure on May 1, 1993.  He was also employed for 30 years as a Pennsylvania State Licensed Real Estate Broker and Appraiser, retiring in 1996.

Bill was very active in Lions Club International, joining the Plains Lions Club in February of 1975.  He served as club Tail Twister, Lion Tamer, and Treasurer in his early years.  During the 1984-1985 Lions Club Year, Bill served as President of the Plains Lions Club and was awarded 100% President Citation.  Lion Bill was very instrumental in Lions Club International, especially District 14-H, serving as Cabinet Treasurer in 1979-1980, and the Northeast PA Lions Eye Bank for 24 years, from 1975-1999.  Lion Bill was the first District Governor of Lions District 14-W, serving from 1986-1987.  After his year as Governor, PDG Bill served as Advisor to the Pennsylvania State Council and the USA/Canada Leadership Forum during 1987-1988.

Bill was a founding member of the National Association of Realtors Appraisal Section, a former member of Wilkes-Barre Board of Realtors, and a former member of the National Association of Real Estate Appraisers.  He was a Lifelong member of St. Francis of Assisi Church, Miners Mills, until its closure and merger.  At St. Francis Church, he was Past-President of the Holy Name Society.  He was also a member of the Hilldale ITLO Club, where her served as Auditor for 10 years; The Hilldale community Center, serving as President in 1966; The Plains American Legion, Joseph E. Conlon, Post 558; The American Red Cross, Plains/Laflin Blood Drive, serving as chairman, and the CWA International Typographical Union, Local 187, where he served as Chapel Chairman, International Convention Delegate, Treasurer, Vice President, and President.

He and his wife the former Shirley Logan, would have celebrated their 62nd wedding anniversary on April 2, 2018.

He was preceded in death by his grandson Barry Matthews, Brother Leonard Kozerski and his wife Elaine, and daughter-in-law Nadine Kozerski.

A Mass of Christian Burial will be held Thursday, March 22, 2018 at 10:00 am in St. Monica’s Parish, 363 W. 8th Street, West Wyoming, PA  18644, with Father Peter Tomczak, officiating.  Those attending the funeral services and mass are instructed to go directly to church Thursday morning.  Interment will be held in Mount Olivet Cemetery, Carverton section of Wyoming.  Family and friends may call Wednesday evening from 5:00 to 8:00 pm at the Corcoran Funeral Home, Inc., 20 South Main Street, Plains, PA  18705.  The Plains Lions Club and Lions of District 14-W will meet at 6:45 pm at the funeral home for Necrology Services at 7:00 pm.

Memorial donations may be made to LCIF  (Lions Club International Foundation) C/O The Plains Lions Club in Past District Governor Bill’s memory.