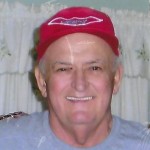 William A. Olson, 80 of the Hudson section of Plains, Twp., passed away Saturday morning, November 14, 2015 at Geisinger Wyoming Valley, Plains, Twp., after an 8 year battle with leukemia.

Born in the Parsons section of Wilkes-Barre, he was the son of the late William and Anna (Drust) Olson.

Bill attended James M. Coughlin High School, Wilkes-Barre, and was an Army veteran serving his country from 1955 to 1957. He was a member of St. Joseph’s Church, Hudson, until its merger and was employed by the Plains Township Road Department for 20 years. He was an avid hunter and fisherman.

He was preceded in death by his Brothers Charles, Joseph and Andrew Olson, and his Sisters Albina Velicky and Margaret Dixon.

Funeral Services for Bill will be held Tuesday, November 17, 2015 at 7:00 pm at the Corcoran Funeral Home, Inc., 20 South Main Street Plains, PA 18705. Interment will be held at the convenience of the family. Family and friends may call Tuesday evening from 5:00 to 7:00 pm at the funeral home.