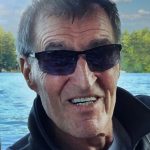 Thomas F. Rovinski, 73 of Pittston, passed away Saturday evening, March 19, 2022 at Regional Hospital, Scranton, after a courageous battle against cancer.

Born in Plains Township, he was the son of the late Stanley T. and Josephine K. (Bartoli) Rovinski.

Tom was a graduate of Sacred Heart High School, Plains, Class of 1966, was a member of the 1965 Sacred Heart Basketball Championship team, and was a graduate of Wilkes College, earning his Bachelor’s Degree in Business Administration. He was a United States Coast Guard Veteran serving during the Vietnam War, attaining the rank of Electronics Technician, 2nd Class. While enlisted in the Coast Guard, he was a member of the USCG National Basketball Team, Cape May, NJ, where he was awarded as the Most Valuable Player (MVP). Upon his Honorable Discharge from active duty in 1974, Tom was employed at SCI Dallas, as the activities manager until his retirement in 2011.

He was a member of St. John the Evangelist Church, Pittston, the Larksville American Legion, Post 655, where he served as Adjutant. Tom had a love of basketball, which he played, coached, and refereed. He was an avid North Carolina Tar Heels basketball fan and was an avid golfer. He had a great love for his family and he will be dearly missed.

He was preceded in death by his brother Ronald Rovinski.

Tom’s wife and family wish to extend their deepest thanks to his oncologist, Dr. Martin Hyzinski, his staff, and his family physician, Dr. Mauer Biscotti, for their wonderful care and compassion given to Tom during his battle against cancer.