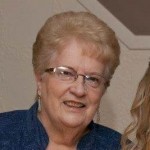 Born in Dallas, she was the daughter of the late Edmund and Gertrude (Marsland) Miller.

She was preceded in death by her husband of 56 years, Andrew Gobla on June 18, 2013, daughter Elizabeth Stawasz, sisters Edna Stredney, Jane Miller, and Gert Heffernan, and her brother James Miller.

Funeral Services for Ruth will be held Saturday, October 3, 2015 at 11:00 am at the East End Primitive Methodist Church, 79 Laurel Street Wilkes-Barre, with Rev. Marty Garms, Pastor, officiating. Interment will be held at the convenience of the family.