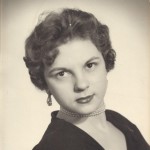 Born in Wilkes-Barre, she was the daughter of the late Michael & Veronica (Ferdo) Yencha.

She was a graduate of Plains Memorial High School, and was a homemaker all of the life. She was a lifelong member of Sacred Heart Church, Plains, until its closure and merger.

She was preceded in death by her husband Jerome J. Buckler on October 16, 1984.