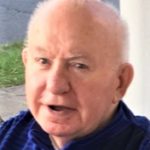 Robert John “Bob” Haggerty, born November 7, 1935, to the late William and Margaret (Keblish) Haggerty from the Miners Mills section of Wilkes-Barre, passed away peacefully at the age of 85 on Sunday, November 22, 2020 at the home of his daughter.

Bob was a 1953 graduate of James M. Coughlin High School, Wilkes-Barre. In 1954 Bob enlisted in the United States Navy where he served as an aviation electrician for four years on the Air Craft Carrier USS Lake Champlain. While in service to his country, Bob was awarded the National Defense Service Medal and Good Conduct Medal. After his honorable discharge in 1958, Bob was employed by the Deluxe Toy Company in Wilkes-Barre for nine years. In 1967 he was then hired at Sunshine Market Inc. where he worked for the company until its closing in 2009.

In 1973 Bob married Theresa Gayle (Wilson) Bubblo and move to the Laflin area where the couple raise their three daughters. Bob and Gayle later moved to the Swoyersville area in 2017 to be near their family.

Bob was a member of the Laflin Volunteer Fire department for several years. He was also a member of Saint Maria Goretti Church, Laflin, where he was an usher and Eucharistic Minister. As an avid reader of western novels, Bob was also a big fan of Notre Dame Football and the Minnesota Vikings. Whenever he got the chance, Pop-Pop loved telling stories of his navy days and travels to his grandkids.

Bob was preceded in death by his brothers William Haggerty, Thomas Haggerty, and James Haggerty.

Due to the Corona Pandemic, a small family service is being planned through the Corcoran Funeral Home, Inc., 20 South Main Street, Plains. A memorial service and dinner to celebrate Bob’s Life, will be held at a later date.