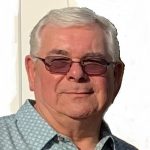 Robert J. “Bones” Mislivets, 74 of Bear Creek Township, passed away Tuesday evening, October 5, 2021 at his home with his family by his side.

Born in Wilkes-Barre, he was the son of the late Stanley and Anna (Kimsel) Mislivets.

Bob was a graduate of Wilkes-Barre Township High School, and was a member of the Pennsylvania National Guard.  Robert was known by many names: “Bob”, “Bobby Bones”, “Bonesy”, and was owner/operator of Bones Service Station in Wilkes-Barre until his retirement in 2020.

He was a member of the Onawandah Campground, Tunkhannock, and a former member of the Bear Creek-Buck Township Lions Club. Bob had a love of hunting and fishing that turned into an avid outdoor photography hobby.  Bob’s family was the most important thing to him and his grandchildren were the light of his life.

He and his wife the former Velma Shillabeer celebrated their 50th Wedding Anniversary on May 29, 2021.

In addition to his parents, he was preceded in death by his brothers Stanley and John Mislivets.