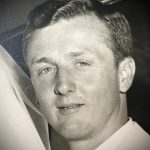 Richard Paul Belles died on December 3, 2019 at the VA Medical Center in Wilkes-Barre. The deep love, presence and prayers of all his family comforted him, as he prepared to enter into eternal life.

Born in Plains on May 19, 1941, he was the oldest son of the late Paul & Helen (Kelly) Belles. He graduated from Plains High School with the Class of 1959. There he was a star athlete in basketball and baseball. His love for competitive sports continued throughout his life.

After graduation he enlisted in the US Army and was assigned to the USA EUR (US Army/Europe). During his tour in Germany he tried out for and was accepted into the Elite Special Troops Division. He proudly represented the US as a team member of the Celtics Basketball Team and the Spartans Baseball Team. His pitching led the Spartans to “the team to beat” status. The Celtics went on to play in the International Basketball Tournament in France. He received Letters of Commendation from his commanding officer for his outstanding contribution to the growth and success of the teams.

Coming home after honorably serving his country, Rich continued to work hard and play hard. He first worked in the family business “Paul’s TV.” Over the years he was employed by Stegmaier Brewery & Casey-Kassa Coal Co. He then received his certification at LCCC in Electrical Science & Application and was self-employed as Belles Electric. He retired from the Electrical Services Dept. at the VAMC in 2011.

A man of quiet determination with a fierce spirit of competition, he played to win in basketball, baseball, softball and golf. He enjoyed being part of winning two state championships in the PA Amateur Softball Assoc. Games (1984 & 1997). In 2006, he scored a hole-in-one at the NY Conklin Players Club. In retirement, he played golf 8 days a week. Two of Rich’s favorite songs were the Irish ballad, Danny Boy and My Way by Frank Sinatra. He was a member of the Plains American Legion, Joseph E. Conlon, Post 558, The Polish American Veteran’s, The Henry Citizens Club, and The Italian American Citizens Club, all of Plains.

In addition to his parents, he was preceded in death by brother, Leon; sisters, Dorothy Mazur and Paulette Weeks; and beloved nephew Jason McNeill.

We are very grateful to Rich’s many good friends with whom he shared a good game – a cold beer – and great conversations. We also extend our deepest gratitude and appreciation to the phenomenal heath care team at the VAMC Hospice Unit. Rich’s long journey through Parkinson’s dementia is over. May he rest in God’s peace.

Funeral will be held Monday, December 9, 2019 at 9:15 am at the Corcoran Funeral Home, Inc., 20 South Main Street, Plains, PA 18705, with a Mass of Christian Burial at 10:00 am at Sacred Heart of Jesus Church, 215 Lackawanna Avenue, Dupont, PA 18641, to be celebrated by Father Thomas J. Petro, Pastor. Interment with Military Honors accorded by the United States Army and the Plains American Legion Military Honors Detail will be held in the parish cemetery, Dupont. Family and friends may call Sunday afternoon from 2:00 to 5:00 pm at the funeral home.

Memorial donations may be made to Sacred Heart of Jesus Church, Dupont, or to The Michael J. Fox Foundation, P.O. Box 5014, Hagerstown, MD 21741-5014 or at www.michaeljfox.org.