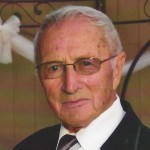 Born November 2, 1930 in Wilkes-Barre, he was the son of the late Frank and Katherine (Smith) Uniatowski. Ray was a lifelong resident of the Heights section of Wilkes-Barre and was a graduate of James M. Coughlin High School, Wilkes-Barre, class of 1948. He was a U.S. Coast Guard Veteran, serving during the Korean Conflict from 1951-1954. Prior to his retirement, he was employed by Modern Handling Equipment Company from 1967-1995, and Colours Inc., from 1998-2012.

Ray loved spending time with his family. He was an avid hunter and golfer and enjoyed fixing things. Working on vehicles was one of Ray’s many skilled talents. He greatly enjoyed spending time in his motor home, whether it was sitting still in his driveway or nestled into a campsite at one of his favorite RV parks. He greatly enjoyed spending time down the shore. Ray was a wonderful husband, father, and grandfather. Ray has touched everyone’s life who knew him. He will be forever in our hearts and will always bring a smile to our faces. He will be greatly missed by all.

He was preceded in death by his granddaughters Sarah Uniatowski and Julia Kolaski, Brother Frank Uniatowski, brother-in-law Thomas Radcliffe, as well as several aunts and uncles.

The family would like to extend a very special thank you to all of the nurses and staff at Hospice of the Sacred Heart in Dunmore and the staff from Personal Home Care and the doctors and staff at Geisinger Heart Hospital.

Funeral Mass will be held Saturday, November 28, 2015 at 10:30 AM at Holy Cross Polish National Catholic Church, 23 Sheridan Street Wilkes-Barre, PA 18702 with the Very Reverend Thaddeus Dymkowski, pastor, officiating. Family and friends are asked to go directly to church Saturday morning. Entombment will be held in St. Mary’s Cemetery, Hanover Township, at the convenience of the family. Family and friends may call Friday evening, November 27, 2015 from 5:00 to 8:00 pm at the Corcoran Funeral Home, Inc., 20 South Main Street Plains, PA 18705.

Memorial donations may be made to Hospice Of The Sacred Heart, 100 William Street Dunmore, PA 18510.