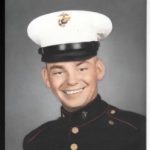 Born in Plains Township, he was the son of the late Terrance P. and Helen (Holbrook) O’Brien, Sr.

Patrick was a graduate of James M. Coughlin High School, Wilkes-Barre, and was a U.S. Marin Corps Veteran, serving from November 1959 to December 1960. Upon his honorable discharge from active duty he was employed as a barber at the VA Medical Center, Plains, for over 20 years. He was a member of the Marine Corps League, Miners Mills.

He was preceded in death by his brother Daniel O’Brien.