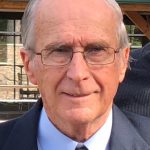 Born in Old Forge, he was the son of the late Anthony and Mary (Gambal) Woytowich.

Mitty was a graduate of Old Forge High School, Class of 1950 and was an Army Veteran of the Korean War, serving in the Medical Corps. Upon his honorable discharge from active service, he attended Scranton University, and was a graduate of Wilkes College, earning his Bachelor’s Degree in Science.

Mitty was employed for many years as a Chemical Sales Representative at Textile Chemical Company, Reading, until his retirement. He also worked at Merck Pharmaceuticals where he was on the original team that developed cortisone. He also worked as a die chemist at Gold Toe Hosiery. He was a member of Holy Trinity Orthodox Church, Wilkes-Barre, and the F. & A.M. Lodge #0664 for 61 years.

Mitty was as unique as his name. He was the first one to dispense a joke. He could fix anything and was a true “car guy” loving time together with his sons at car shows. Mitty loved spending time with his four grandchildren and hearing about their daily activities and watching them grow. He and his daughter Jane had a special relationship often calling each other to share the latest new joke. He was always, always family first.

A fan favorite at The Cafe’, he faithfully supported his son Jeff in whatever role he needed to play. He enjoyed working the room with the customers. Mitty loved them and the feeling was mutual.

He and his wife the former Marie Wartella celebrated their 61st wedding anniversary on November 9, 2020. He was Leroy to her Loretta.

Mitty was a treasure to know and love and we will miss him more than words can say.

In lieu of flowers, memorial donation may be made to Shriners Hospital for Children, 3551 N. Broad Street, Philadelphia, PA 19140. A celebration of Mitty’s life will be held post COVID.