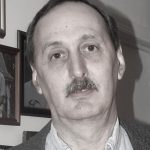 Louis was born in January of 1944 in Sioux City, Iowa. He was the middle son of the late Lawrence G. and Muriel (Grotewold) Duchaine and spent his entire childhood and adolescence in the small farming community of Sloan, Iowa.

Lou, as he was called by everyone, attended Sloan Elementary School, Sloan High School and graduated with the first Westwood High School Class of 1962. He was an all-around athlete participating in basketball, football, and his favorite sport, baseball, in which he excelled as a pitcher.

Upon graduation from high school he attended Norfolk Junior College. As a young man wanderlust overtook him and he decided to see what the big city was like and took off on his own by bus to New York City, knowing no one there nor having even visited. He took on the challenge of a small town boy in the big city and made a life for himself there, working for 20 years in the print ad department of Saks Fifth Avenue. He met and married Norma Ortiz.

After leaving Saks employment he settled in Pennsylvania living for several years in Blakeslee Pennsylvania and working in the print department of Karol Media.
Lou’s retirement years were spent in Hunlock Creek, Pennsylvania. He was a man of simple tastes and activities. He enjoyed best his solitude, which included stepping onto his porch to see what wild life might be visiting around his apartment, and especially his wild birds which would gather on his many bird feeders. Though he enjoyed most his “alone time” he had many friends in his neighborhood who enjoyed their chats with Lou. Lou had always been a collector of baseball cards and in his later years took up the hobby again. He became a highly skilled creator of matted and framed sports card memorabilia, travelling Northeast Pennsylvania selling at various card shows.

Lou was preceded in death by his parents and an older brother, Larry.