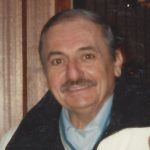 Born in Wilkes-Barre, he was the son of the late John & Margaret (Hozdovic) Tirpak.

Joe was a graduate of James M. Coughlin High School, Wilkes-Barre, Class of 1946, and was an Army Veteran of World War II. He was employed in the area shoe factories and last at the Department of Public Welfare for 12 years until his retirement.

He was preceded in death by his daughter Debbie Swetin, sister Henrietta “Cookie” Flaherty,
brothers Ronnie and John Tirpak, Jr.

Surviving are his wife of 68 years the former Dolores Purta, daughter Kathy Tirpak and her partner Eric Triani, and son Joseph Tirpak, Jr. and his wife Sandy, all of Wilkes-Barre, grandchildren Christopher and Ryan Tirpak, great-grandchildren Xaiver, Myles, Lucas, and Mia Tirpak, several nieces and nephews.

Dolores would like to thank her daughter Kathy and her partner Eric for everything they did for her and Kathy’s father Joe during these tough times. Dolores would also like to extend a special Thank You to her special friend, Lucille Chimento, who would help her with everyday tasks no matter how big or small.

Graveside services will be held at the convenience of the family in Saints Peter & Paul Cemetery, Plains. Arrangements by the Corcoran Funeral Home, Inc., 20 South Main Street, Plains, PA 18705.