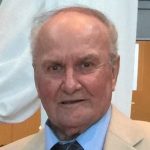 Joseph C. Falchek, 78 of Plains Township, passed away Tuesday morning, March 15, 2022 at the home of his daughter Jennifer.

Born in Plains, he was the son of the late Clement and Lottie (Holby) Falchek.

Joe was a graduate of Plains Memorial High School, and was an U.S. Air Force Veteran, attaining the rank of Airman 1st Class. Upon his honorable discharge from active duty in 1965, Joe was employed in waste management as a work leader at Tobyhanna Army Depot until his retirement.

He was a member of Saints Peter & Paul Church, and the Polish American Veterans, both of Plains.

Joe loved fishing and was an avid collector of Lionel model trains. He spent much of his time after retirement building a large train platform that he could share with his grandkids and in the garage working and fixing anything and everything. Many things brought joy into his life but nothing more than spending time with his family, from sitting on his recliner binge watching shows with his wife, family vacations to Lake Wallenpaupack, or attending any activity that his grandchildren were participating in. In his last year since his wife’s passing, he enjoyed splitting his time between Plains and Delaware living with his daughters and their families.

He was preceded in death by his wife and best friend of 49 years, the former Jacqueline “Jackie” Stanley on December 14, 2020, their son Joseph M. Falchek on January 20, 2013 and his brother Leonard Falchek.

Surviving are his children, Jennifer Joseph and her husband, Richard, Plains, Jeffrey Falchek and his wife, Meredith, Kingston, and Janeen McKenna and her husband John, Middletown, DE, grandchildren, Jeffrey and Riley Falchek, and Jacqueline and Jason McKenna, sister Patricia DeCinti and her husband Anthony, Wilkes-Barre, nieces and nephews.

A Mass of Christian Burial will be held Monday, March 21, 2022 at 10:00 am at Saints Peter & Paul Church, 13 Hudson Road, Plains, PA 18705, with Father John C. Lambert, Pastor, officiating. A Live Stream of the Funeral Mass will be on Saints Peter & Paul Parish FACEBOOK page. Interment with Military Honors accorded by the United States Air Force and the Plains American Legion Funeral Honors Detail will be held in St. Mary’s Byzantine Cemetery, Blanchard and Cemetery Streets, Plains. Family and friends may call Monday morning from 9:00 am until the time of service at church. Arrangements entrusted to the Corcoran Funeral Home, Inc., 20 South Main Street, Plains, PA 18705.

Memorial donations may be made to Hospice of Sacred Heart, 600 Baltimore Drive #7, Wilkes-Barre, PA 18702 in his honor.