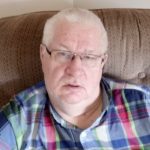 Born in Plains Township, he was the son of the late Anthony G. and Stella (Haczewski) Shatrowskas.

In addition to his parents, he was preceded in death by his brothers Walter, Alfred, and an infant brother.

Surviving are his brothers Anthony, Jr. and his wife Arleen, Avoca, Daniel, Duryea, Stanley and Edward, both of Wilkes-Barre, and several nephews and nieces.

Memorial donations may be made to the charity of one’s choice in John memory.