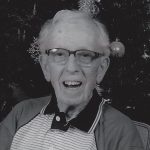 John McKeown, 99, a well-known figure in Wilkes-Barre and the Luzerne Country Community and Service activities passed away November 26, 2019 at Highland Park Senior Living, Memory Unit, Wilkes-Barre Twp. John lived his life to serve others rather than being served. He knew that a person might not always remember what you said, but would always remember how you made them feel.

He graduated from James M. Coughlin High School, and went on to attend Bucknell, later known as Wilkes University. In 1941, he met the “Love of his Life”, Margaret (Peg) Lavelle/Watkins at a dance at the Hotel Sterling. They married in August 1942, and John was drafted into the Army in May of 1943. He became a First Lieutenant and Personnel Officer at Norfolk, Port of Embarkation, supervising about 2,500 military personnel. He and Peg moved to Norfolk, Virginia. John was discharged June 1946, he was awarded the American Campaign Medal, World War II Victory Medal, and the Army Commendation Ribbon Citation. He was then assigned to the V.A. Hospital in Philadelphia. In 1949, the government began building the V.A. Hospital in Wilkes-Barre. John was asked if he would transfer to his hometown, and of course the answer was “YES.” He often referred to himself as the “VA Hospital’s first employee”.

He was baptized in Holy Savior Church, where he took an active part in Church life. He was an officer of the Holy Name Society, leader of the St. Vincent de Paul Society, and many lay organizations, and later Lector until the church closed. John was a Fourth Degree member of the Knights of Columbus, Council 302. He was on the Boards of The CYC, The United Way and CEO and many other civic organizations. He and a few of his friends established the 5 AC in East End for Little League Baseball. John loved Big Band Music and was the “Ambassador” for the Big Band Society for Northeastern Pennsylvania. He and Peg followed the Russ Morgan Band all over the country, and always danced to their own pleasure and those that watched them. He was still working at the V.A. Hospital when the Agnes Flood of 1972 hit the Valley. With Congressman Dan Flood, he established temporary emergency medical facilities at the VA Hospital and College Misericordia, so the Valley had necessary emergency health care on both sides of the river. For many days he slept on his desk at the V.A., making sure the people of the Valley were safe, he knew his family was safe on a hill in East End.

His Irish heritage meant so much to him that he researched, found his roots in Ireland, and sponsored many trips there for people to enjoy the beauty and history of Ireland. He even found a long lost cousin in Australia, and he and Peg spent a month there. Family pictures were so similar to the family here in the U.S. and Ireland. Assisted by Stephen Daley from Ireland, he established the Irish Teachers Program in 1974. With support from local families, the community and King’s College. Teachers could come to the Valley for three weeks – just for the cost of air fare. Here they connected to Irish roots, shared experiences with American families, local teachers, traveled to Philadelphia, Amish country, Washington, D.C., and New York. During 4 decades more than 1,000 teachers came to the Valley from Ireland. He was not only a member, but historian for the Friendly Sons of St. Patrick, the Donegal Society, and the Ancient Order of the Hibernians.

He retired from the V.A, but John always felt the need to do more. He went to work at King’s College and went on to establish The Physician’s Assistant Program. It has become one of the most recognized programs in the country – not only for clinical achievement, but placement as well.

He was preceded in death by his parents, his beloved wife, Peg, son, Mark, daughter, Alice, and sisters, Mary Bobkowski and Ann Bordy, brother Joseph.

Surviving are children, John (Rosemarie), Fredericksburg, Va. Kathy (Frank) Hummel, Hanover Twp., Michael (Sherry), Ramsey, N.J., and Mary (Dave) Foose, Warrior Run; Brothers Michael, Stroudsburg, and Charlie (Theresa), Wilkes-Barre; Cousins Annmarie and Margaret Brislin, Wilkes-Barre., and Ben Franklin, 15 Grandchildren, 8 Great-Grandchildren, and numerous nieces and nephews. John was a devoted father, son and brother, and a friend to all. For John, Faith and Charity were important things in life – giving of his “time, talent, and treasure” to the less fortunate. John’s life is an exceptional example of service to others. His life personified the Great Commandment: “Love your Neighbor as Yourself”.

We would like to thank Asera Care for all they did in the past 2 years, and as life comes to the end. Also, Highland Park, Memory Unit for you expert care, Love for the residents and family, and compassion for all. Least we not forget, “Our Angel”, Katrina Bennett. She has been our and John’s “Light” for over 5 years, and always there to guide us.

John’s memory can be appreciated by reaching out compassionately to someone else – just as John would do. Any donations can be made in John’s name to the St. Vincent de Paul Kitchen.