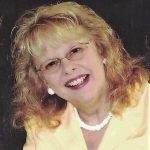 Born in Wilkes-Barre, she was the daughter of the late Jane (Roberts) Mahon.

Jane was a graduate of Elmer L. Meyers High School, Wilkes-Barre, Class of 1964, and was employed at the Wilkes-Barre General Hospital as a secretary for 32 years, until her retirement. She was a member of Bear Creek Messiah P.M. Church where she served as a Youth Group Leader, Sunday School Teacher and Bible School Teacher. After Jane relocated to Drums, PA, she became a founding member of New Life Community P.M. Church, Mountain Top. Jane loved reading and solving puzzles. A great passion of Jane’s was crocheting and she would crochet over 50 scarves for the unfortunate and homeless every year.

In addition to her mother, she was preceded in death by her grandson Thomas Mosley, step-son Richard Bettica, and daughter-in-law Bonnie Mosley.