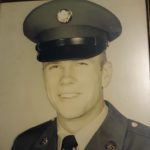 James R. Wood, 77 of Wilkes-Barre, passed away Wednesday morning, June 24, 2020 at Hospice of the Sacred Heart, Dunmore, with his daughter Jamie at his side.

He was born and raised in Edwardsville, PA, son of the late Clifford K. and Bertha May (Roberts) Wood. He graduated from Edwardsville High School, where he excelled at baseball, basketball, and football.

He went on to proudly serve in the US Army, where he was a Fixed Wing Mechanic and Gunner. His tour was spread out over Europe at the end of the Korean War, and in Vietnam at the beginning of the Vietnam War. After the military, he worked as an aircraft mechanic at the Forty Fort Airport, then on to Owens-Illinois (Techneglas), until his retirement.

He was an avid fisherman and bowler. He also enjoyed traveling around to different areas to do metal detecting. He loved being a father, grandfather, and great-grandfather.

He was preceded in death by his brothers Donald Wood and Clifford Wood, and his former wife Barbara Wood.

He will be sadly missed by daughters Jamie Ann Evanko and her husband T.J., and Denise Williams; son Joseph Wood, all of Wilkes-Barre, Grandchildren Liam Evanko, Maeve Evanko, Shane Williams, Shauna Williams, Austin Picciotti, and Kyle Picciotti, Great grandchildren Addison, Shayla, and Charlotte Williams. He will be most remembered for his kindness, generosity, and above all sense of humor. You fought the good fight Dad, you finally earned your rest.