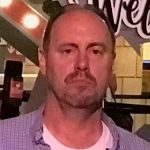 Born in Wilkes-Barre, he was the son of the late Harvey W. and Mary Ellen (Thomas) Everett, Sr.

Harvey attended James M. Coughlin, Wilkes-Barre, and was an Army Veteran, serving in Germany from 1984 until his honorable discharge in 1987. It was during this time that Harvey met his future wife Angelika. Upon returning to the United States, Harvey and Angelika settled in the Hudson section of Plains Township and he was employed for the United States Postal Service for over 30 years, currently the Postmaster of Clarks Summit, PA.

In addition to his parents and grandparents, Doug and Mary (Roth) Thomas Sr., he was preceded in death by his son Alexander Everett on April 11, 2015.

Funeral Services for Harvey will be held Thursday, August 11, 2022 at 10:00 am at the Corcoran Funeral Home, Inc., 20 South Main Street, Plains, PA 18705, with Deacon Donald Crane, officiating. Interment with Military Honors accorded by the United States Army and the Plains American Legion, Post 558, Funeral Honors Detail, will be held in Mount Olivet Cemetery, Carverton section of Wyoming. Family and friends may call Wednesday evening, August 10, 2022 from 5:00 to 8:00 pm at the funeral home.

Memorial donations may made to the American Foundation for Suicide Prevention by visiting www.afsp.org.