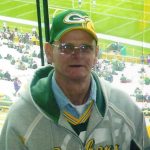 George W. Wolfe, 72 of the East End section of Wilkes-Barre, passed away suddenly, Tuesday, January 29, 2019, after suffering a heart seizure.

Born in Plymouth, he was the son of the late Samuel O. and Johanna (Cahill) Wolfe.

George attended Wilkes-Barre Area schools and was employed as a steelworker at Inter Metro, Wilkes-Barre, until his retirement.

He was a member of Good Shepherd Lutheran Church, Wilkes-Barre, and the United Steelworkers Union. George was an avid football fan and a great supporter of Coughlin High School Football Booster Club. He would often be seen “working the chains” at the Crusaders football games. He also coached Northeast Junior Crusaders Football.

To say George was an avid Green Bay Packers Fan would be a huge understatement. The Packers have lost their greatest fan and supporter. He was also a great supporter of his granddaughter Kallie. He was her biggest fan and would always be there for all of her endeavors.

He was preceded in death by his sister Nancy Friermuth, and his brother David Wolfe.