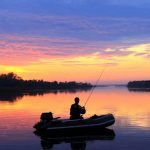 George A. Wilkas, 83 of Plains Township, passed away Monday morning, November 11, 2019 at the Wilkes-Barre General Hospital.

Born in the Hilldale section of Plains, he was the son of the late Joseph and Antoinette (Volingavage) Wilkas.

George was a graduate of Plains Memorial High School, Class of 1954 and was an Army Veteran of the Korean Conflict. He was employed as a postal carrier for many years, until his retirement.

George was a member of Saints Peter & Paul Church, Plains and was a Life Member of the Disabled American Veterans. Active in sports, George was a Biddy Basketball Coach at Saints Peter & Paul Grade School, Plains, was an avid fisherman and would fish at Martha’s Vineyard and in Florida with his sons and loved to play his accordion, especially at weddings.

He was preceded in death by his son Joseph Wilkas on July 11, 2007, and his sister Lillian Wilkas.