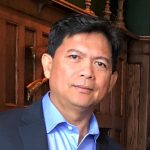 Fidelito Garcia Patron, 56 of Plains Township, passed away Friday morning, January 6, 2023 at the Hospital of the University of Pennsylvania, Philadelphia, after a courageous battle against Acute Myeloid Leukemia.

Born and raised in Tiaong, Quezon, Philippines on July 18, 1966, he was the son of the late Ruperto and Feliza Suarez (Garcia) Patron.

Fidelito earned his BS in Civil Engineering at the University of Batangas, Batangas, Philippines. In 1995, he immigrated to the United States and worked at a dialysis clinic in Philadelphia. He met his future wife Irene in August of 1998, fell in love, married, and moved to Wilkes-Barre, PA in 1999. He was employed as a strander at Bridon American Corp, since 2002.

Fidelito was a loving, kind, generous, and carefree man. He was a wonderful husband, father, brother, and uncle. He always made sure to work hard and provide for his family. He was intelligent and could MacGyver anything he wanted to make or to fix a problem. He loved fishing, hunting, camping and traveling with his family. He also enjoyed watching action films. He was a member of St. Mary’s Church of the Immaculate Conception, Wilkes-Barre, where he also served as a hospitality minister.

Funeral will be held Wednesday, January 11, 2023 at 10:00 am at the Corcoran Funeral Home, Inc., 20 South Main Street, Plains, PA 18705, with a Mass of Christian Burial at 10:30 am at St. Mary’s Church of the Immaculate Conception, 134 South Washington Street, Wilkes-Barre, PA 18701, with Father Joseph Verespy, Pastor, officiating. Private family interment will be held in the Philippines at a later date. Family and friends may call Tuesday from 6:00 to 8:00 pm at the funeral home.

Memorial donations may be made to St. Mary’s Church of the Immaculate Conception in Fidelito’s memory.