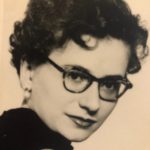 Eileen A. Spagnola, 81, of Wilkes-Barre passed away peacefully on Tuesday, December 3, 2019.

Born December 5, 1937, in the East End section of Wilkes-Barre, Eileen is the daughter of late Carl Armbruster, Sr. and Marie (Monahan) Armbruster.

She was a graduate of Sacred Heart High School, Plains. Eileen was employed by Bell Telephone as an operator for 37 years until her retirement in 1992. She was heavily involved in the Bell Telephone Pioneers throughout her career. She was a longtime Friend of Scouting, serving as Packmaster of Pack 136, Miners Mills and Scoutmaster of Troop 33, Wilkes-Barre. Later in life, Eileen enjoyed her involvement in the Red Hat Society serving as Queen of the Young at Heart chapter. She was an avid baker, especially at Christmas time; and enjoyed countless hours of fun passing on her passion and knowledge of baking to her grandchildren every year.

In addition to her parents, she was preceded in death by her siblings Carl William Armbruster, who was a casualty of the PA 109th Field Artillery train accident on September 11, 1950, Fred Armbruster, Marie Jones, Claire Rutcosky, and Louise Armbruster; son, Robert , Jr.; and former husband Robert, Sr.

Eileen’s family wishes to extend their heartfelt gratitude to the nurses and staff of Wesley Village for the amazing care they provided to Eileen over the past several months. A special thanks to Eileen’s sister-in-law, Mary Alice Drahus, and her special friend Becky.

Funeral will be held Saturday, December 7, 2019 at 9:30 am at the Corcoran Funeral Home, Inc., 20 South Main Street, Plains, PA 18705, with a Mass of Christian Burial at 10:00 am at Saints Peter & Paul Church, 13 Hudson Road, Plains, with Monsignor Thomas M. Muldowney, Vicar General of the Diocese of Scranton, officiating. Interment will be held in St. Mary’s Cemetery, Hanover Township. Family and friends may call Friday from 4:00 to 7:00 pm at the funeral home.

In lieu of flowers, memorial gifts may be made to the SPCA of Luzerne County, 524 E. Main Street, Fox Hill, Plains, PA 18702 in Eileen’s memory.