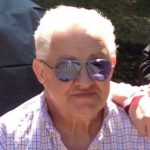 Born in Wilkes-Barre Township, he was the son of the late John and Mary (Hojecki) Sisko.

Ed graduated from Wilkes-Barre Township High School in 1960 and played football and basketball until he graduated. Ed was employed as a laborer at Metro Wire and Manufacturing until his retirement in 2003.

Ed learned to play the drums in high school which began his love for music. Ed became a drummer for a popular area band, Joe Nardone and the All Stars. He played many venues with this band and many others. His favorite and everyone else’s favorite place to play was the San Souci, or the Souci as it was known. He drummed for many famous people, a story he told his children many times.

Ed’s favorite thing was to travel with his family. He would take them on a summer adventure every year. Once the Family Reunions started, that became his new vacation. He loved spending time with his entire family for three days every summer. Playing cards, telling stories of the past and making new memories. But the biggest love of Ed’s life was his grandchildren. He was an extraordinary grandfather who spent almost every day of their lives with him. From hometown adventures, to fishing up at camp, to playgrounds and bike rides, which evolved to rides to high school and soccer games. He never missed one.

In addition to his parents, he was preceded in death by his son Timothy Sisko, grandson Jacob Shedlock and his brothers John and Lawrence Sisko.

Surviving in addition to his wife Patricia are his daughter Kim Shedlock and her husband Joseph, and granddaughter Willow Shedlock, all of Laurel Run. As well as his sisters Evelyn Krishock of Ohio, and Paulette McDaniels of Laurel Run. Several nieces and nephews and cousins.

A Celebration of Ed’s Life will be held at a later date. Arrangements entrusted to the Corcoran Funeral Home, Inc., 20 South Main Street, Plains, PA 18705.