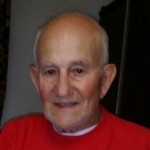 Dominick was a graduate of Plains Memorial High School, Class of 1947, and was an Army Veteran serving from 1948 to 1950. Upon his honorable discharge from active service, he attended King’s College, graduating in 1954. He was a member of Sacred Heart Church, Plains, and currently a member of Saints Peter & Paul Church, Plains. He was employed by Commercial Credit, in Scranton and Wilkes-Barre for over 30 years until his retirement.

A loving and kind man, Dominick was a member of the Plains American Legion, Joseph E. Conlon, Post 558, a member and an inductee of the Plains Sports Hall of Fame, where he served as Club Treasurer for 25 years, The North End Slovak Club, and the Polish American Veterans, Plains.

He was preceded in death by his grandson Ryan Zawada, sisters Lena Pape, Rose Fletcher, Liz Hewitt, and Eleanor Pape.

Dominick’s family would like to offer a special thanks to the wonderful and caring staff at the Department of Veterans Affairs Hospice Palliative Care Unit.

Funeral will be held Thursday, September 29, 2016 at 9:00 am at the Corcoran Funeral Home, Inc., 20 South Main Street, Plains, PA 18705, with a Mass of Christian Burial at 9:30 am in Saints Peter & Paul Church, 13 Hudson Road, Plains, PA, with Father John C. Lambert, Pastor, officiating. Interment with Military Honors will be held in the Italian Independent Cemetery, West Wyoming. Friends may call Wednesday evening from 5:00 to 8:00 pm at the funeral home.

Memorial donations may be made to the Department of Veterans Affairs Hospice Palliative Care Unit, 1111 East End Blvd., Wilkes-Barre, PA 18711 in Dominick’s memory.