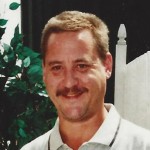 Daniel John Reposh, 46 of Bear Creek Twp., passed away on October 21, 2015 in Kansas City, Kansas, where he had been working there for the past two years.

Born on May 11, 1969 in Wilkes-Barre, he was the son of Donald and Mary Grace (McDonald) Reposh of Bear Creek.

Dan graduated from James M. Coughlin High School, Wilkes-Barre with honors and Wilkes College, also with honors in 1985 in physics and computers.

Dan was employed by Associated Whole Sale Grocers, Inc., in Kansas City, Kansas as a consultant for 6 months, which led to full time employment for the past two years.

He was preceded in death by his grandparents John and Helen Reposh and Mary McDonald and George Karolchyk.

Surviving in addition to his Parents Donald and Mary Grace are his wife Diane and his son Galen, Pittston, PA.