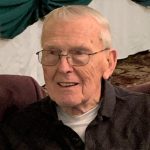 Charles J. McKeown, 87, of the East End Section of Wilkes-Barre, peacefully passed away Monday, April 6, 2020 with his family at his side at the Geisinger Wyoming Valley Medical Center in Plains Township, PA.

Born in the East End section of Wilkes-Barre, he was the son of the late Michael J. McKeown and Mary C. (Lavelle) McKeown.

Charlie was a graduate of James M. Coughlin High School, Wilkes-Barre, class of 1950 and served in the United States Naval Reserve Mobilization Unit for twelve years. He was a faithful parishioner of Holy Savior Church until its closure, and later St. Nicholas R.C. Church. He was an active member of the Donegal Society for many years.

Charlie began his career with the PA Bureau of Corrections in January 1960 at the State Correctional Institution at Dallas. In 1970, he transferred to the Board of Probation and Parole and retired as a Parole Agent from S.C.I. Dallas in 1990.

Upon his retirement, he worked part time for General Cinema, but many will remember him as the Greeter at Sam’s Club from 2000-2014 who always had a joke, a kind word, and a smile for all who came through the doors. Charlie loved to travel and explore new places with family members and friends. He most enjoyed his summer vacations at Long Beach Island NJ with his entire family around him. He could often be seen at area casinos with his wife Theresa. He was also an avid Red Sox fan.

In addition to his parents, he was preceded in death by infant son Charles Andrew McKeown, brothers John & Joseph McKeown, and sisters Mary (McKeown) Bobkowski and Ann (McKeown) Bordy.

Private services will be held from the Corcoran Funeral Home, Inc., 20 South Main Street, Plains, PA 18705 with a Mass of Celebration to be held at a date yet to be determined. Memorial donations may be made to Saint Jude Children’s Research Hospital, 262 Danny Thomas Place, Memphis, TN 38105.