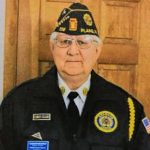 Casimer “Mark” M. Bacewicz, 79 of Plains, passed away February 5, 2021 at Wilkes-Barre General Hospital, one week after the passing of the love of his life, his dear wife, Ann.

Mark was born August 29, 1941 in Plains, son of the late Stella Bennett (Bacewicz). He was a graduate of Plains Memorial High School, Class of 1959.

Mark enlisted in the U.S. Army in June of 1959. After completing basic training and ordnance school (mechanic), he was stationed in Gelnhausen, Germany. While in Germany, he served as team chief of a 5-man team which supported 6th Field Artillery. He also performed engine work for the 33rd Armor and 48th Infantry Divisions, before being discharged from the Army in 1962.

He was previously employed at Craft Furniture and during this time also worked at Arlan’s. He then worked full-time at Bloomsburg Metal Company until his retirement in 2018. While employed at BMC, he worked part time at Stroud’s Department Store, followed by JC Penney’s.

On June 20, 1964, Mark married the former Ann Stempleski. Ever the true romantic, he was constantly surprising Ann during their 56-year marriage with gestures of his affection; such as: singing telegrams, having flowers delivered to her work, and a horse drawn carriage to celebrate their 25th wedding anniversary. They would typically be found together with friends for breakfast, the casino, or relaxing on the front porch, watching “all the traffic.”

Mark was known as “Pop-Pop” to his grandchildren and was the most caring husband, father and Pop-Pop. He was always excited to find an ear to listen to his stories and never hesitated to ask his grandchildren for assistance with his electronics.

Mark was a proud member of the Plains Lions Club, where he was known as “Cas”, and the Plains American Legion, Joseph E. Conlon, Post #558, where he was proud to serve on the Funeral Honor Guard. He would be the first to volunteer in any way that he could.

Mark’s family would like to extend a heartfelt thank you to the hospital staff at Wilkes-Barre General Hospital for their care and compassion given to both him and Ann. Also, his neighbor Bethann Hoffman who for the past 14 years has been family.

A Mass of Christian Burial will be held Tuesday, February 9, 2021 at 11:00 am at St. Andre Bessette Church, 668 North Main Street, Wilkes-Barre, PA 18705, with Father Ken Seegar, Pastor, officiating. Private interment with Military Honors accorded by the United States Army and his comrades from the Plains American Legion Funeral Honors Detail will be held in St. Mary’s Cemetery, Hanover Township. Friends and family are invited to a walk through visitation from 10:00 am until the time of Mass Tuesday morning at St. Andre Bessette Church. Those attending the visitation, we ask that you be brief when paying your respects, please follow the practice of social distancing, and masks are required at all times at the church. Arrangements entrusted to the Corcoran Funeral Home, Inc., 20 South Main Street, Plains, PA 18705.

Memorial donations may be made to The Plains Lions Club in Mark’s memory.