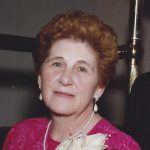 Angeline A. Plis, 87 of Suscon, passed away Wednesday evening, September 18, 2019 at The Gardens at East Mountain, after a courageous battle against Alzheimer’s disease.

Born in Dupont, she was the daughter of the late Albert Brostowski and the late Amelia (Ascani) Brostowski Stanish.

Angeline was a graduate of Dupont High School and was employed as an area manager at ServiceMaster Corporation until her retirement. She was a member of Sacred Heart of Jesus Church, Dupont. Angeline’s joys of life were her grandchildren and great-grandchildren and her trips to Atlantic City.

She was preceded in death by her husband of 55 years, Frank Plis on July 23, 2006, daughter Cheryl McDermott, step-father Stanley Stanish, and sister Irene Kasa.

Angeline’s family would like to thank the staff of the Alzheimer’s Unit of The Gardens at East Mountain, Dr. Charles Manganiello, and the staff of Compassionate Care Hospice, for the wonderful care given to Angeline.

A Mass of Christian Burial will be held Tuesday, September 24, 2019 at 10:00 am at Sacred Heart of Jesus Church, 215 Lackawanna Avenue, Dupont, PA 18641, to be celebrated by Father Thomas J. Petro, Pastor. Those attending the funeral mass are asked to go directly to church Tuesday morning. Private Interment will be held in the parish cemetery at the convenience of the family. There will be no calling hours. Arrangements are entrusted to the Corcoran Funeral Home, Inc., 20 South Main Street, Plains, PA 18705.

Memorial donations may be made to the Janet Weiss Children’s Hospital, 100 North Academy Avenue, Danville, PA 17822.