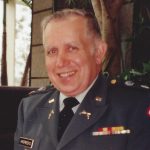 Born in Philadelphia, he was the son of the late Andrew and Sophie (Falchek) Andreeko.

Andy was a graduate of Wyoming Seminary and the Pennsylvania Military College, earning his Bachelor of Science Degree in Electrical Engineering. He was an Army Veteran of the Vietnam War and remained in the Army for 28 years. He served as former Commander of the Wilkes-Barre US Army Reserve Criminal Investigation Detachment (CID) and retired as Lieutenant Colonel. He was employed at Picatinny Arsenal, of Dover, New Jersey for over 34 years as an electrical engineer and logistical specialist.

Andy was a life member of St. Stephen’s Episcopal Church, Wilkes-Barre, a member of the Hackettstown American Legion, Post 164, was President of the Mansfield Township, New Jersey School Board for many years, and was a member of the Hazleton Elk Lodge #200 where he was honored as the Elk of the year in 2015.

Andy was a mostly frustrated Philadelphia sports fan and avid golf enthusiast who is now in heaven with nothing but long drives and short putts.

He was preceded in death by his wife, and love of his life, the former Nancy Davies on April 7, 2000.

Due to the current state of emergency, Funeral Services will be private and held at the convenience of the family from the Corcoran Funeral Home, Inc., 20 South Main Street, Plains, PA 18705. A Memorial Mass will be held in the future at St. Stephen’s Episcopal Church, Wilkes-Barre, PA.