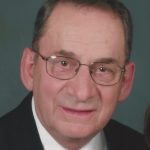 Walter “Wally” Vukovich, 89 of Wilkes-Barre, passed away on Wednesday, April 17, 2019 while in respite at the VA Medical Center, after a long and courageous struggle with Parkinson’s disease.

Born on August 2, 1929, he was the son of the late George Nicholas and Milica Mary (Vujovich) Vukovich and was a lifetime resident of the Parsons section of Wilkes-Barre.

He was a graduate of James M. Coughlin High School, Class of 1948. He attended Wilkes College until 1950 when he enlisted in the U.S. Air Force, serving during the Korean War. He was a Staff Sgt. in the 808th Air Police Squadron, attached to the 27th FEW and the 12 SFW with the strategic air command.

Mr. Vukovich began his life long career in the newspaper business as an apprentice with the Wilkes-Barre Publishing Company, and later became a linotype operator. In 1978 he became a founding member of the Citizens’ Voice, and was the composing room general foreman. He retired as retail advertising manager in 1997. He was a member of the International Typographical Union and The Newspaper Guild/Communication workers of America.

He was a former president of the Wilkes-Barre Newspapers Federal Credit Union and was an active volunteer in Parsons Little League teams. Wally loved to hunt and fish, and spent many hours taking his sons fishing in the early years. He was an avid Red Sox and Penn State fan.

He was preceded in death by his brothers Robert, Paul, and Nicholas Vukovich, and sisters Sophie Griffiths, Rosalie Marks, and Olga Mattey.

Surviving are his wife the former Rita McGrady, who he would have celebrated 54 years of marriage on June 19th, sons Mark, Wilkes-Barre, and Brian and his wife Kristin, Lebanon, grandchildren Bryce, Allison, Regan, Michael, and Aidan, loving sisters-in-law Dorothy Vukovich and Lillian McGrady, numerous nieces and nephews.

Wally’s family would like to thank the many health care personnel who provided care during his lengthy illness. They allowed him to live a much longer and fuller life than would have ever been possible, had it not been for their outstanding care. You are forever in our hearts. In addition, thank you to our extended family and friends for your support over these last years, and at our time of loss.

Funeral Services for Wally will be held Saturday, April 27, 2019 at 10:30 am at the Corcoran Funeral Home, Inc., 20 South Main Street, Plains, PA 18705. Interment with Military Honors accorded by the United State Air Force will be held in Sacred Heart Cemetery, Plains. Family and friends may call Saturday morning from 9:00 to 10:30 am at the funeral home.

Memorial donations may be made to the Parkinson Research Foundation, 5969 Cattleridge Blvd., Suite 100, Sarasota, FL 34232.