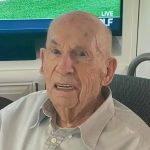 Walter Robert Martin, of El Dorado Hills, California and formerly of the Hudson section of Plains Township, passed away July 10, 2022, which was his 100th birthday, with his family by his side.

For most of his adult life he was employed by the D&H Railroad, Hudson Yards, as a yards man and crane operator. He enjoyed bowling, spending family time at Moon Lake, being a proud mason of the Masonic Lodge #442. He enjoyed golfing later in life. He also loved remodeling friends’ homes and helping out neighbors however he could. He remodeled all of his children’s homes, building cabinetry and furniture.

He was married to the former Elizabeth Davies, on July 3rd, 1944, who preceded him in death at the age of 88. In addition to his pal Bette, he was preceded in death by his sisters, Ruth Jagger (Ralph), Esther Ball (Bob), and Dorothy Bobeck (John).

Funeral services for Walter will be held in California.