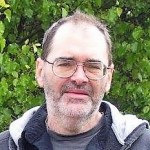 Thomas J. Caffrey, Jr., 56 of Plains Township, passed away Saturday evening, December 17, 2016 at his home after a 12 year battle against brain cancer.

Born in Wilkes-Barre, he was the son of Thomas J. Caffrey, Sr. and his wife Carol (Linker) Caffrey of Plains Township and the late Barbara (Barber) Kotlarchick.

Tom was a graduate of James M. Coughlin High School, Wilkes-Barre, and was employed by Action Lift/Medico Industries as a fork lift manager.

Tom was an avid dirt track race car driver and a collector of model trains. He was also a lover of Heavy Metal Music from bands from the early 1980’s to present day.

In addition to his mother Barbara, he was preceded in death by his grandparents Bernie and Catherine Caffrey, and his step-brother Joseph Linker

Funeral Services for Tom will be held Thursday, December 29, 2016 at 6:00 pm at the Corcoran Funeral Home, Inc., 20 South Main Street, Plains, PA 18705. Family and friends may call Thursday from 5:00 pm until the time of the service at the funeral home.

In lieu of flowers, memorial donations may be made to St. Jude Children´s Research Hospital, 332 North Lauderdale, Memphis, TN 38105.