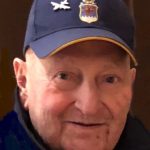 Born in the Hudson section of Plains, he was the son of the late Samuel and Virginia (Byczek) Butch.

Tom was a member of the Pennsylvania National Guard, 28th Division and was a graduate of Plains Memorial High School, Class of 1950. After graduation, Tom enlisted in the United States Air Force and was assigned to the 581st ARS, where he entered paratrooper school at Ft. Benning, Georgia. A Veteran of the Korean War, he served as a tail gunner on a B-29, flying in 22 combat missions in Korea. For his service to our country, he was awarded The Air Medal with Oak Leaf Clusters, The Good Conduct Medal, The Korean Service Medal, The National Defense Service Medal, The United Nation Service Medal and the Parachute Badge with Air Force Wings.

He was preceded in death by his sisters Marion Blazes and Ethel Mehal.

Tom’s family would like to thank Dr. James Brady, Hematology Oncology at Geisinger Wyoming Valley, and all of the staff at the Frank M. and Dorothea Henry Cancer Center, especially nurse Dave.

A Blessing Service will be held Friday, May 10, 2019 at 11:00 am at Saints Peter & Paul Church, 13 Hudson Road, Plains, PA 18705, with Deacon Donald Crane, officiating. Following the services, Military Honors will be accorded by the United States Air Force. Family and friends may call Friday morning from 10:00 to 11:00 am at church. Arrangements by the Corcoran Funeral Home, Inc., 20 South Main Street, Plains, PA 18705.

In lieu of flowers and Mass Cards, memorial donations may be made to St. Jude Children´s Research Hospital, 501 St. Jude Place, Memphis, TN 38105.