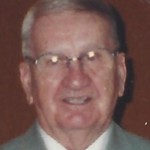 Born in Plains Twp., he was the son of the late Anthony and Bertha (Jaworski) Toloczko.

Ted was a graduate of Plains Memorial High School, and Wilkes College / Penn State Extension Schools, and was a Navy Veteran of World War II.  He was a member to the Plains American Legion, Joseph E. Conlon, Post 558, The Glass Blowers Union, and the Polish American Veterans of Plains. He was a member of SS.Peter & Paul Church, Plains.

Ted was employed as a Foreman for Techneglass Jenkins Township until his retirement; he was a coin/stamp collector and loved to sing and spend time in his garden.

In addition to his parents he is preceded in death by his sisters, Genevieve Klepadlo, Stella Baron, Ceil Haydu, Theresa Shivell, and Jane Seasock; brothers, Joseph and Henry Toloczko.

Surviving are his Wife of 63 years the former Ceil Bilski and Daughter Sandra Toloczko, Plains, several nieces and nephews and cousins.

Ted’s family would like to extend their deepest gratitude to the staff at the Emergency Room, Telemetry, and ICU at Wilkes-Barre General Hospital along with Celtic Health Care/Hospice Community Care for all their compassionate and quality care of Ted.

Funeral will be held Monday at 9:00 am from the Corcoran Funeral Home Inc. 20 South Main Street Plains, with a Mass of Christian Burial at 9:30 am in SS. Peter & Paul Church Plains. Interment with Military Honors conducted by the U.S. Navy and the Plains American Legion Funeral Detail will be held in Mount Olivet Cemetery, Carverton section of Wyoming.  Family and friends may call Sunday from 6 to 8 pm at the funeral home.