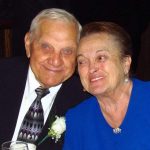 Stanley “Stuz” Malinowski, 92 of the Hilldale section of Plains Township, passed away Thursday, April 16, 2020 at the home of his daughter in Naples, Florida.

Born in Wilkes-Barre, he was the son of the late Adam and Stella (Piasecki) Malinowski.

In addition to his parents, he was preceded in death by his wife of 68 years, Sadie Lini,
his son Stanley “Rick” Malinowski, brother Edward and sister Helen Isaacs.

Stuz was a graduate of Plains Memorial High School, was an Army Veteran of World War II and a member of St. John’s the Evangelist, Pittston. He was employed as a roofer in the Local 30 until his retirement.

Due to the global state of emergency, private graveside services will be held at the Italian Independent Cemetery, West Wyoming. Arrangements by the Corcoran Funeral Home, Inc., 20 South Main Street, Plains, PA 18705.