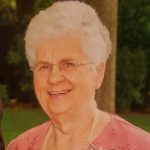 Shirley Mae Kozerski, 83 of the Hilldale section of Plains Township, passed away on Good Friday, March 30, 2018 at the Wilkes-Barre General Hospital, with her family by her side.  Shirley’s passing comes just 12 days since the passing of her beloved husband of 62 years, William J. Kozerski, on March 18, 2018.

Born in Wilkes-Barre, she was the daughter of the late Emerson B. and Leona (Mack) Logan.

She was a Lifelong member of St. Francis of Assisi Church, Miners Mills, until its closure and merger, and currently a member of St. Monica’s Parish, West Wyoming.  Shirley was very active with her husband Bill in the Plains Lions Club, District 14-W and Lions Club International.  She was also affiliated with the American Red Cross, the Plains Blood Bank, and the Wilkes-Barre General Hospital Alumni Association.  Her hobbies included camping, reading, and needle work.

In addition to her husband Bill, she was preceded in death by her grandson Barry Matthews and daughter-in-law Nadine Kozerski, and brothers Robert and Edward Logan.

A Mass of Christian Burial will be held Wednesday, April 4, 2018 at 10:00 am in St. Monica’s Parish, 363 W. 8th Street, West Wyoming, PA  18644, with Father Peter Tomczak, officiating.  Those attending the funeral services and mass are instructed to go directly to church Wednesday morning.  Interment will be held in Mount Olivet Cemetery, Carverton section of Wyoming.  Family and friends may call Tuesday evening from 5-8 pm at the Corcoran Funeral Home, Inc., 20 South Main Street, Plains, PA 18705.