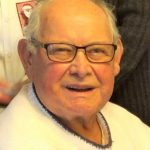 Born in Laflin, he was the son of the late Joseph and Olga (Mudzik) Phillips.

Ron was a graduate of Plains Memorial High School, Class of 1957 and was employed as plant manager at Carter Footwear, Wilkes-Barre, for 38 years until his retirement.

After high school, Ron was invited to the Detroit Tigers Farm Team where he had a tryout as a catcher, was an avid Philadelphia Phillies Fan and was a member of the Polish American Veterans, Hudson.

Ron was a loving husband, father, and friend. He was married to the Love of his Life, the former Cecelia Silvi, and they celebrated their 61st Wedding Anniversary on August 20, 2021. Ceil was his rock and best friend always there by his side. Their marriage was the perfect example of love at its best. He loved to travel with his family and friends, making numerous trips to New York Casinos, Atlantic City, Myrtle Beach, Florida, and Arizona. He was everyone’s POP. He will truly be missed at the Sunday Porch parties. The family would like to thank the wonderful neighbors who were always there to lend a hand, Karl, Deb, Matt, and Mark.

He was preceded in death by his sisters Ann Giovannini and Patricia Ceprish, brothers Joseph, Thomas, Robert “Bubba” and David Phillips, and his son-in-law Charles “Charlie I” Infantino.

A Mass of Christian Burial will be held Monday, December 13, 2021 at 10:00 am at Saints Peter and Paul Church, 13 Hudson Road, Plains, PA 18705, with Father John C. Lambert, Pastor, officiating. A Live Stream of the Funeral Mass will be on Saints Peter & Paul Parish FACEBOOK page. Family and friends may call Monday morning at church from 9:00 am until the time of Mass. All those attending the visitation and Mass are asked to wear face masks regardless of vaccination status. Arrangements entrusted to the Corcoran Funeral Home, Inc., 20 South Main Street, Plains, PA 18705.