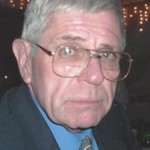 Born in Nanticoke, he was the son of the late Frank and Irene (Jablonski) Weisgable and the step-son of Stephen Jasonis of Nanticoke.

He was a graduate of Nanticoke High School and was an Army reservist.

Ron was employed for JC Penny until his retirement and was a former member of the North-End Slovak Citizens Club, North End Section of Wilkes-Barre.

In addition to his parents, he was preceded in death by his infant brother Francis.

Funeral will be held Wednesday, March 5, 2014, at 9:30 am from the Corcoran Funeral Home, Inc., 20 South Main Street, PA  18705, with a Mass of Christian Burial at 10:00 am in St. Benedict’s Parish, 155 Austin Avenue  Wilkes-Barre, PA, with Father Joseph A. Kearney, Pastor, officiating.  Interment will be held at the convenience of the family in Memorial Shrine Burial Park, Carverton section of Wyoming.