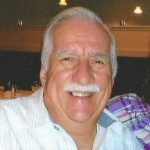 Born in the Keystone section of Plains, he was the son of the late Grant and Helen (Sokola) Pryor.

Roger was a graduate of Plains Memorial High School, Class of 1960. He was an Air Force Veteran and was employed for CK Coffee Service of Wilkes-Barre for many years, and last for Luzerne County Community College.

Roger was an accomplished musician and played with Rusty and the Versatiles, Polka Punch, and last with The Duo of Roger and Joe. Roger and Joe played at many church bazaars and fundraisers in the Valley and beyond.