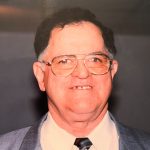 Robert L. Thornton, Sr., 90 of West Pittston, met our Lord and Saviour, Jesus Christ on the morning of All Saints Day, November 1, 2021 at his home.

Born in Wilkes-Barre, he was the son of the late John and Eleanor (Stortz) Thornton.

Bob was a graduate of St. Nicholas High School, Wilkes-Barre, and was employed as a Lineman/Splicer at Bell Telephone, later Verizon, for nearly 5 decades until his retirement.

A Mass of Christian Burial will be held at 10:00 am Thursday, November 4, 2021 at Corpus Christi Parish/Immaculate Conception Church, 605 Luzerne Ave, West Pittston, PA  18643 with Monsignor John Sempa, Pastor, officiating. Interment will be held in Mount Olivet Cemetery, Carverton section of Wyoming.  Friends and family may call Thursday morning from 8:30 am until the time of mass at Church.  Arrangements entrusted to the Corcoran Funeral Home, Inc., 20 South Main Street, Plains, PA  18705.

In lieu of flowers, Memorial donations may be made to the Care and Concern Ministry, 35 William Street, Pittston, PA  18640 or by visiting www.stjohnspittston.com/online-giving or to Immaculate Conception Church.