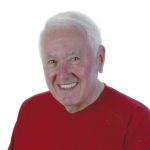 Bob was born in the Hilldale section of Plains Township on July 2, 1928, son of the late Spartico and Margaret (Haggerty) Leonardi. His love for his hometown was never ending.

Bob was a graduate of Plains Memorial High School, class of 1945, and received certifications from Ohio State University, Penn State University and Oklahoma University in economic development. He was an Army Veteran, serving with the 175th MP’s. On his way to Camp Rucker, Alabama, he survived a train accident in Screven, Georgia in 1950.

Bob was a member of the Plains American Legion, Joseph E. Conlon, Post 558 and St. Ignatius Church, Kingston. At St. Ignatius, he served on John Cardinal O’Connor’s Synod and the Community Relation Committee. As a Business Agent of the Boot and Shoe Workers, he had the privilege to speak before the U.S. Congress House Ways and Means.

Bob was very involved in politics, having run for Luzerne County Commissioner and District Magistrate. He was also Chairman of the Kingston Republican Party, and served as Secretary/Treasurer of the Greater Wilkes-Barre Labor Council. In 1972, he was appointed to the newly formed Luzerne County Transportation Authority and became their first chairman. Later he was appointed to the position of Regional Representative of the Department of Commerce and promoted to Regional Director of the Governor’s Response Team.

In 1972, Bob was General Campaign Chairman of the United Fund in the midst of the greatest natural disaster to hit the Wyoming Valley, The Agnes Flood. He became the first labor leader in the state of Pennsylvania to lead a Million Dollar campaign. While serving as chairman, he had the honor of sharing the stage with people like Johnny Cash, Merv Griffin, and Harry Reasoner of 60 Minutes.

In 1975, he was named Chairman of Kings College First Annual Fund Drive where he achieved 100% of its goal. As a member and President of the Hilldale ITLO Club, he was only the second president since the clubs founded. Bob served on many boards and was a well-known Toastmaster and humorist.

Bob was an avid New York Yankees and Green Bay Packers fan, and was the General Manager of Hilldale Baseball. Bob’s love for his family, community, union, sports, and politics were always in his heart.

He was preceded in death by his beloved wife of 53 years, the former Stella Prestas on April 25, 2006, brother Gene Leonardi, sisters Shirley Leonardi, and Betty Gubitoso.

Funeral will be held Tuesday, December 18, 2018 at 9:45 am at the Corcoran Funeral Home, Inc., 20 South Main Street, Plains, with a Mass of Christian Burial at 10:30 am in St. Ignatius Church, 339 North Maple Avenue, Kingston. Interment with Military Honors accorded by the U.S. Army and the Plains American Legion will be held in St. Mary’s Cemetery, Hanover Twp.

Memorial donations may be made to the charity of one’s choice in Bob’s name.