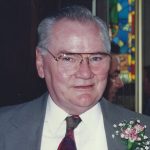 Robert B. Hapeman, Sr., 84, of North Wilkes-Barre, passed away on Saturday January 4, 2020, at his home surrounded by his loving family.

He attended St. Mary’s School and graduated from Kingston High School, Class of 1954. Bob married his high school sweetheart, Theresa (Tish) Meehan in 1956, and they celebrated their 63rd anniversary this year.

Robert opened the door to his successful architectural career as a draftsman with the firm Eyerman and Hoban in Wilkes-Barre, following the completion of his degree at Columbia Technical Institute in Washington, D.C. Shortly after he was welcomed as partner in the firm Eyerman, Csala, and Hapeman after receiving his National Architectural Registration with the American Institute of Architects NCARB. He also served as secretary to the local chapter of the American Institute of Architects (AIA).

Bob’s passion was his pride, proficiency, and perfection in his skill, leading to many notable achievements spanning his 45-year career. Some of his most prominent works were the development of the Children’s Section of the Osterhout Library, development of the Wilkes-Barre/Scranton International Airport, remodeling of the Pittston and Hoyt Libraries, numerous projects with Bell Telephone, as well as Little Flower Manor (St. Teresa Villa) and the restoration of St. Leo’s Church in Ashley. Bob retired from Eyerman, Csala, Hapeman and Handman, in 2000. He was known to thanklessly give his time and talents to help many friends and family over the years.

Mr. Hapeman was an active member and volunteer of Sacred Heart/St. John’s Parish in North End (formally St. John the Evangelist Parish on N. Main Street). He has been most recently a member of St. Andre’ Bessette Catholic Parish. Bob was a longtime choir member and Eucharistic Minister, at each parish.

Bob loved his wife and his family immeasurably. He spent many wonderful years at his home in Rehoboth Beach, Delaware with his very large, extended family.

Everyone who knew Bob, loved him, he was adored and loved by all. He will always be remembered as having a wonderful sense of humor and incredible Irish wit. He always had a smile on his face and a joke on his lips…..he will be missed.

In addition to his parents, he was preceded in death by his brother Paul J. Hapeman, Jr. and recently his sister Doris H. Rishty.

In addition to his wife Tish, Bob is survived by his children; Robert Jr. and wife Paula, Pringle, PA; Kevin and wife Kim, Jenkins Twp.; Theresa (Tish) Britt and husband, Richard, Charlotte, NC; along with grandchildren, Kerrie Hapeman; Kaitlyn Hapeman Carr and her husband Judd; Kade Hapeman; Jennifer and Stephanie Britt and Great Grandchildren; Addison and Benjamin Carr; along with an uncountable amount of nieces, nephews and family that he adored immensely on both sides of his and his wife’s family.

Bob’s family would like to thank the staff at the University of Pennsylvania Hospital Hematology/Oncology division in Philadelphia, PA as well as Sacred Heart Hospice in Wilkes-Barre, PA.