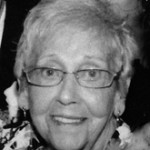 Born in Berwick on June 19, 1920, she was the daughter of the late Luigi and Nicoletta (DeFebo) DeCinti.  Reared in the Heights section of Wilkes-Barre, she lived most of her adult life in the North End section of the City.  She attended Wilkes-Barre public schools, and was a graduate of GAR Memorial High School, Class of 1938.
Prior to her marriage, she worked for the Wilkes-Barre Lace Manufacturing Company. Later in life, she operated her own cleaning and catering service.

Known as “Priscilla” or “Percy,” she will be remembered best for being the heart and soul of her family. The love she abundantly shared, along with her heart, home, and fabulous cooking, enriched the lives of her family, friends, and even strangers.
She is survived by the love of her life, her husband, William J. Milz, Sr., with whom she shared sixty-four wonderful years of marriage. She was a member of St. Nicholas Roman Catholic Church, Wilkes-Barre.

Priscilla’s family wishes to thank the staff of Riverstreet Manor for the excellent care and genuine affection which was lavished on her during her residency there. Their kindness and caring was truly extraordinary.

Funeral will be held Monday at 9:15 AM. from Corcoran Funeral Home, Inc.,  20 S. Main St., Plains Township, with a Mass of Christian Burial at 10:00 AM. in St. Nicholas Church, Wilkes-Barre. Interment will be in St. Mary’s Cemetery, Hanover Township.