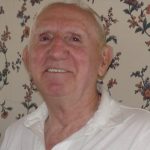 Peter was a life-long resident of Plains, Twp., son of the late Joseph and Annie (Kelly) Jordan, and was a member of the Plains United Presbyterian Church.  Peter attended Plains Memorial High School.  He left high school after completing the ninth grade with hopes of joining his brothers in military service, but was denied enlistment because of a head injury he sustained as a child.  Peter then sought employment so he could financially help his parents.

Peter worked close to home through his many years of employment.  During his younger years he had a newspaper route, was a dishwasher and worked in a print shop printing comic books.  Peter worked for The DeLuxe Game Corporation maker of playground apparatuses, in Kingston and followed the company to Wilkes-Barre where the business was then named the Leslie Henry Company, maker of western toys.  Peter was also employed by Klein Automotive, Owens-Illinois and Muskin Pools.

Peter enjoyed long walks through Plains, Hudson and Miners Mills, and relaxing on the porch with a Find a Word book and a can of Pepsi.  Peter spent many hours at the Wyoming Valley Mall where he would meet up with friends and family.

Peter’s passion was being a father, grandfather and great-grandfather having 4 daughters, 8 grandchildren and 5 great-grandchildren he loved being with them as often as he could.  He taught us how to swim, ride bikes and of course how-to roller skate.  Peter is well known for his love of skating.  He and his friends visited many rinks back in the day, and taught his daughters and grandchildren how to roller skate at Roller King and Skateaway.  Peter never missed birthday parties, barbeques or any type of family get together.  He was always available to lend a hand, willing to help in any way he could and never minded the many phone calls from his grandchildren asking for help repairing their bicycles, skateboards or trips to Burger King.  He took in many T-Ball, Little League & Soccer games cheering for his grandchildren.

Peter was preceded in death by his daughter Debra Ann Jordan, his sister Mary B. Jordan, brothers, Nelson, Matthew, John and William and nephew Matthew Jordan.

Peter’s family wish to thank Dr. Paul Witt and staff for going the extra mile by spending time with Dad at every appointment and really listening to him.

We also thank Timber Ridge Health Center where Dad was a resident for the last two years. CNAs, NAs, Nurses, Dr. Almeky, PA Heather, Premier Rehab., and staff members from all the various departments that we have met at one time or another, we appreciate each and every one of you, your love, care and concern for our father did not go unnoticed. We have acquired many new friendships.

A private funeral service will be held at the convenience of the family.  A celebration of Peter’s life will be held at a later date.  The family ask anyone wishing to send a memorial donation to send it in Peter’s memory to the Plains Little League, Attn: Robert Abbey, PO BOX 1541, Plains, PA 18705.