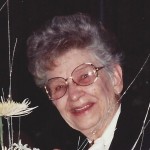 Born in Plains, she was the daughter of the late Frank and Josephine (Marek) Kwiatkowski.

She was a graduate of Sacred Heart High School, Plains, and was employed as a waitress for the Hart Restaurant, Wilkes-Barre, and later as a homemaker.

Pauline loved baking, cooking, gardening and had a great love for her family. She enjoyed a good Pinochle and card games with a few Gin Daisies afterward. Pauline was featured in June of 2015 by the local newspapers, television, and radio for celebrating her 100th birthday. When asked “What is the secret to being 100?” she answered “Drink a lot of booze!” Her interview led to worldwide press when her interview was published from Venezuela to Chicago to the United Kingdom. She was trending on Facebook and became a YouTube sensation. She would be referred to as the Stegmaier Lady for her love of the local brewery and would lead to Pauline being chosen to pour the first Stegmaier Draft at the 2015 Oktoberfest held at the Mohegan Sun, Plains, Twp.

She was preceded in death by her husband Dominic R. Spagnola on March 25, 1991, daughter Rita M. Letinski on June 2, 2014 and several brothers and sisters.

Surviving are her granddaughter and caretaker Janine Spagnola and her partner Joseph Martin, Jr., Miners Mills, many nieces, nephews, and cousins.

Memorial donations may be made to Troopers Helping Troopers 3625 Vartan Way, Harrisburg, PA 17110.