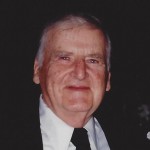 Born in Hudson, Paul was the son of the late Otto and Elizabeth (Mattick) Binker. He was a graduate of Sacred Heart High School, Plains and was a Navy Veteran of World War II.

Paul was a self employed painter for many years until his retirement.

Paul was a great kidder and loved to travel with his wife Gertrude (Tolarski ) Binker who together would have celebrated 65 years of marriage on October 21. He loved to sing and was an avid bowler, a dedicated Philadelphia Phillies fan, Wilkes-Barre/Scranton Penguins and Philadelphia Eagles fan.

Preceding him in death in addition to his parents are his brothers Joseph, Francis and Otto Binker; Sisters, Betty Catani, Dorothy DeAnthony, Julia Beretta and infant Sister Mary Binker.

Funeral will be held Thursday, September 24, 20125 at 9:00 am from the Corcoran Funeral Home, Inc. 20 South Main Street Plains, with a Mass of Christian Burial at 9:30 am in SS. Peter & Paul Church 13 Hudson Road, Plains, with Father John C. Lambert, Pastor, officiating. Interment will be in Sacred Heart Cemetery, Plains. Family and friends may call Wednesday evening at the Funeral Home from 6:00 to 8:00 pm.

Then family would like to thank the VA Community Living Center, third floor for their compasion during Paul’s stay.

Memorial donations may be made to the Plains Lions Club.