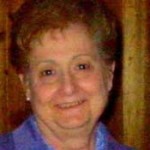 Born in Hilldale, she was the daughter of the late Sebastian and Viola (Panateri) Carnevali.

Norma was a graduate of Plains Memorial High School and was owner of Bon-Nan Boutique of Plains and was a seamstress for the area dress factories for many years.
She was a member of St. John the Evangelist Church, Pittston. Norma and her Husband Joseph celebrated their sixty third wedding anniversary on April 24 2013.
Norma was preceded in death by Two Infant Children and her Brother Elmer  Carnevali.

Funeral will be held Saturday at 8:45 am from the Corcoran Funeral Home Inc. 20 South Main Street Plains, with a Mass of Christian Burial at 9:30 am in St. John the Evangelist Church, Pittston with Msgr. John Bendik, Pastor, officiating.

Interment will be in the Italian Independent Cemetery, West Wyoming.
Friends may call Friday evening from 5 to 8 pm at the funeral home.

Memorial donations if desired may be made to the Plains Volunteer Ambulance Asssociation 90 Maffett Street Plains.