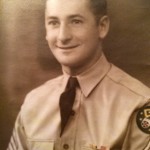 Born in Gualdo Tadino, Italy, he was the son of the late Ralph and Matilda (Alfonse) Presciutti.

Naz was a graduate of James M. Coughlin High School, and was an Army Air Forces Veteran of World War II, serving in the Pacific Theatre with the 475 Group, 433rd Fighter Squadron, completing 212 bombing raids.  Upon his discharge from service in 1945, Naz attended Penn State University and received his bachelor’s degree in education, as well as his Masters equivalency.   He was employed as a teacher at the Wilkes-Barre Vocational/Technical School, until his retirement.

He was a member of St. Benedict’s Parish, Wilkes-Barre, a charter member of the Wilkes-Barre golf Club, Bear Creek, and was an avid skier until the age of 82.

He and his wife the former Ann Nardone, celebrated their 68th wedding anniversary on August 11, 2013.

He was preceded in death by his brother Gino Presciutti, sisters Dorothy Radicchi, and Ada Pauletti.

Naz’s family would like to thank Dr. Charles Manganiello, The Pittston Medical Group, and the staff of Golden Living Center for their compassionate care of Naz.

A Mass of Christian Burial for Naz will be held Saturday at 9:30 am at St. Benedict’s Church, 155 Austin Avenue  Wilkes-Barre, PA, with Father Joseph Kearney, Pastor, officiating, followed by full Military Honors by the U.S. Army and the Plains American Legion, Post 558 Funeral Detail.   Interment will be held in Denison Cemetery, Swoyersville, at the convenience of the family.  Family and friends may call Saturday morning from 9:00 am till time of mass at St. Benedict’s Church.